Hello there and welcome to Rhea’s Neon Journal 🙂 Miranda Kenneally’s Hudred Oaks series has another instalment! Jesse’s Girl, a romance between a rockstar and his shadow releases tomorrow  and I have a excerpt & giveaway to share with you all 🙂 Follow the rest of the blog tour right here and enter the international giveaway down below 🙂

Everyone at Hundred Oaks High knows that career mentoring day is a joke. So when Maya Henry said she wanted to be a rock star, she never imagined she’d get to shadow *the* Jesse Scott, Nashville’s teen idol.

But spending the day with Jesse is far from a dream come true. He’s as gorgeous as his music, but seeing all that he’s accomplished is just a reminder of everything Maya’s lost: her trust, her boyfriend, their band, and any chance to play the music she craves. Not to mention that Jesse’s pushy and opinionated. He made it on his own, and he thinks Maya’s playing back up to other people’s dreams. Does she have what it takes to follow her heart—and go solo?

As much as I love music, I am generally not a fan of country. I don’t like banjos. I don’t like sappy lyrics about trucks and hauling hay. Dolly Parton is my mortal enemy—my mom plays “Jolene” over and over and over and over, and it makes me want to chop my ears off like van Gogh. Yeah, yeah, I’m from Tennessee, where it’s a crime if you don’t love country, but I like deep, rumbling beats and singing loud and fast and hard. I do not like closing my eyes and crooning to a cow in the pasture. Yet here I am at a Jesse Scott concert, getting ready to meet him and to see if he’ll let me shadow him next Friday.

My school requires every senior to “shadow” a professional for a day. It’s their way of helping us figure out what kind of career we want. Like, if you want to be president when you grow up, you might get to shadow the mayor. Want to be a chef? Have fun kneading dough at the Donut Palace. When I said “I want to be a musician,” I figured they’d send me to work in the electronics section at Walmart.

I certainly never expected to shadow the king of country music.

It turns out that Jesse Scott is my principal’s nephew. Jesse won TV’s Wannabe Rocker when he was ten and has gone on to become very successful. In sixth grade, every girl in class—myself included—took the Teen Beat quiz: “Would Jesse Scott Like Your Kissing Style?” (Obviously the answer was yes.) In middle school, I had a Jesse Scott poster on my ceiling. It’s hard to believe he’s only eighteen, because he’s already won three Grammys. When he was younger, his songs were about family, fishing, and playing baseball, but lately they’re about love and making love and all things sexy.

I wouldn’t say I’m a fan anymore, but I would never give up an opportunity to learn from a professional with such a gorgeous, pure voice. I want to learn what it’s like to perform day in and day out. Despite what everyone and their mom says—that I’ll struggle as a musician—all I want is to play guitar in front of a crowd and hear people cheer for me.

I can’t believe I’m backstage at the Grand Ole Opry! I bounce on my toes. Jesus, is that an archtop Super 4, the model Elvis played? I’ve never seen one in real life. It probably cost more than my house. I’m ogling the guitar when Jesse Scott comes out of the bathroom, drying his hair with a towel. He pads across the room to the couch, wearing nothing but a pair of rugged jeans with more holes than Swiss cheese. The lighting is dim, and he doesn’t seem to notice I’m here, which is good, because I’ve moved from ogling the guitar to ogling him.

Who wouldn’t? He was one of People magazine’s “50 Most Beautiful People,” and it is a truth universally acknowledged that you should stare at people who’ve made that list. The guy’s gorgeous. Like in the boy-next-door way. His wet, wavy, brown hair curls around his ears and nearly hits his shoulders, and while he doesn’t have a six-pack or anything, his body is fit. I wish he’d look my way so I can see his famous brown eyes. They always remind me of those caramel chews Poppy gives me when I visit. Jesse has some sort of Gaelic symbol tattooed on his left shoulder blade. I want to reach out and trace the design.

God, get ahold of yourself, Maya. Don’t be a horndog. Besides, he’s so not my type. I don’t do pretty boys.

Growing up in Tennessee, Miranda Kenneally dreamed of becoming an Atlanta Brave, a country singer (cliché!), or a UN interpreter. Instead she writes, and works for the State Department in Washington, D.C., where George W. Bush once used her shoulder as an armrest. Miranda loves Twitter, Star Trek and her husband.

I was provided a free eARC of this book in exchange of an honest review. This did not in any way, however, influence the content of this review.

What say you, mortal? Cancel reply 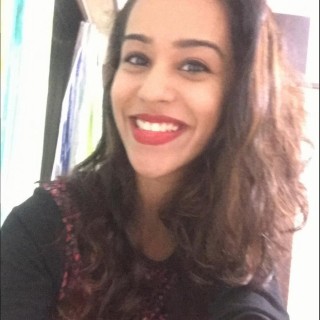 None at the moment. Check back soon!

I am an associate for Amazon US, and if you buy Amazon products through my blog, I receive a small portion of the sales! This money can then be used to fund giveaways in the future.

© Rhea Dsouza and Rhea's Neon Journal, 2014-2016. Unauthorized use and/or duplication of this material without express and written permission from this blog’s author and/or owner is strictly prohibited. Excerpts and links may be used, provided that full and clear credit is given to Rhea Dsouza and Rhea's Neon Journal with appropriate and specific direction to the original content.